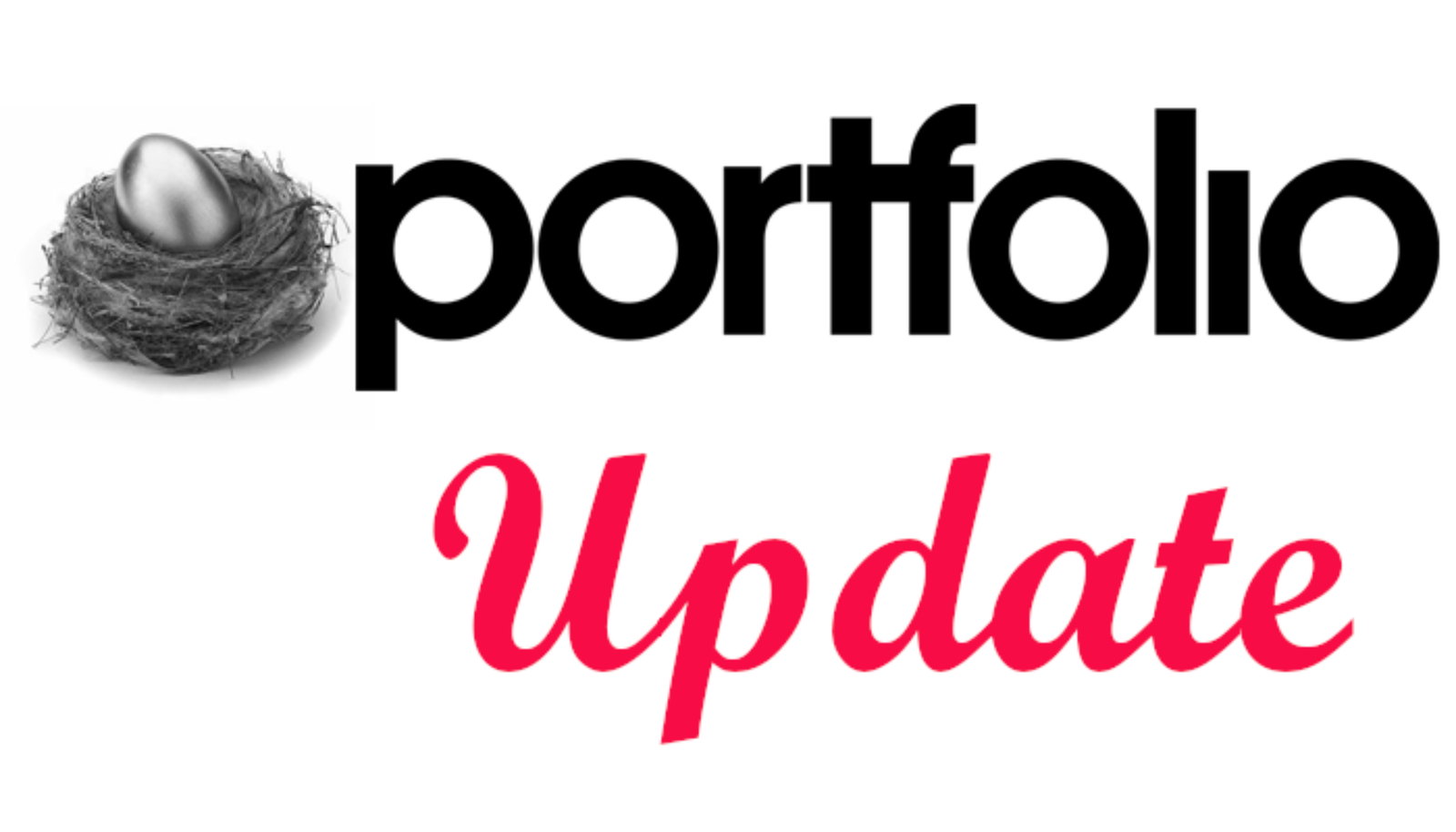 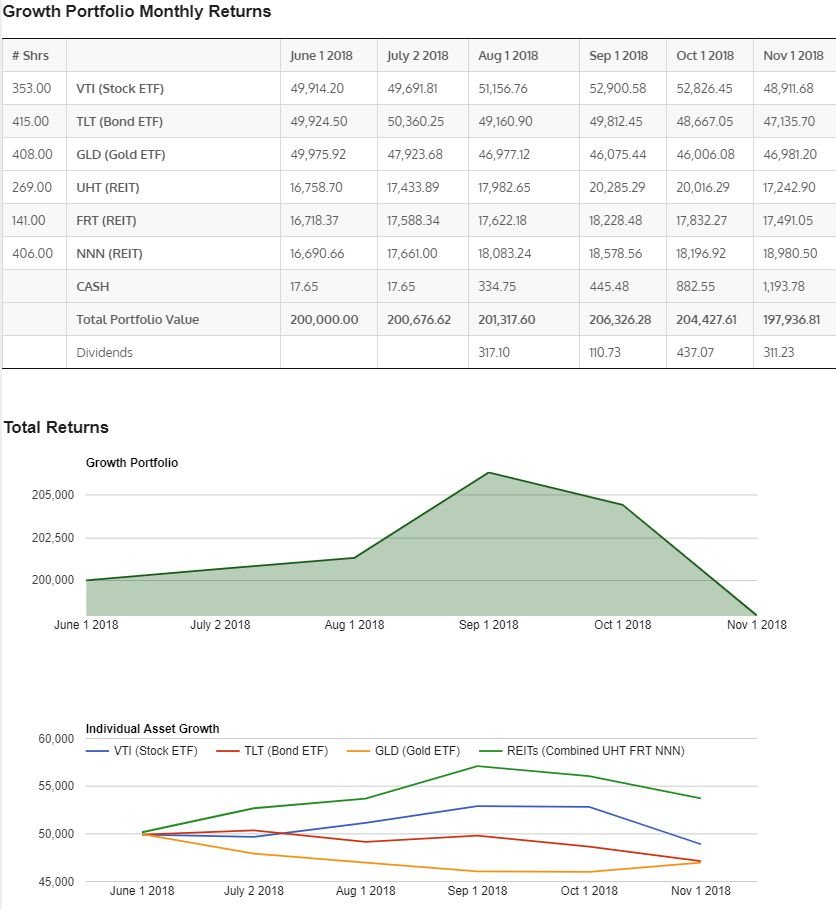 The charts above update monthly here

The Growth Portfolio took a dip in October, mostly due to some uncertainly about the US midterm elections, which will be held in November (6th). That, added to the trade war situation with China really shook things up a bit. It may calm down towards the end of November once we get the elections out of the way. Who knows if it will rally, or fall depending on if democrats or republicans win the house and/or the senate. Personally I think it will rally back up into the new year. Optimism is high right now, but not quite high enough for a major crash yet (yes, you read correctly, “optimism”, markets typically seem to do the opposite of what people think they will do). If you look to the past, when people are most optimistic is when the biggest crashes happened, when no one was expecting it.

When we look at the green portfolio growth graph at the beginning of the page, it looks quite daunting seeing the portfolio dive that much in a month. I read somewhere how many hundreds of billions have been shaved off of world markets from this pullback. It sounds scary, however when you look at it from a longer term perspective, it really wasn’t all that much. The blue line is our Growth Portfolio. 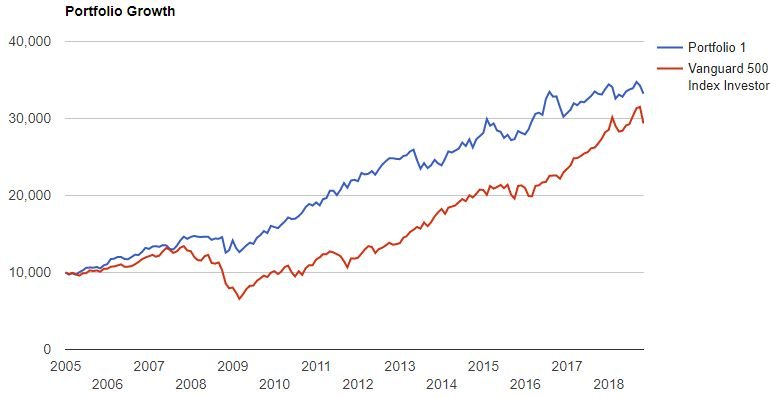 I believe we are due for a much bigger correction than we have had so far, which we may still get here over the next few months. However as mentioned earlier, I think we have at least one more up-wave in stocks to come yet before a big correction, so maybe sometime early next year it will arrive. Just my opinion as I am by no means an expert, that’s why I just buy and hold assets, rebalancing the portfolio once per year.

Corrections in western-world markets happen on average about every 5 to 7 years. The current US bull market has gone on now for almost ten years without a correction of more than 10%. A pullback now would actually be healthy to relieve some pressure on the markets which are very overbought. Although it would not be comfortable at all, they never are 🙂

If you read the update last month, you’ll remember I discussed gold and the love/hate relationship I have with it? Well, here is the love part! Take a look at the charts below and see how gold reacted when the Dow Jones Industrials Index started to get volatile. The red circles are pointing out the same period on each chart, see what happened to gold right after the DJI tanked? 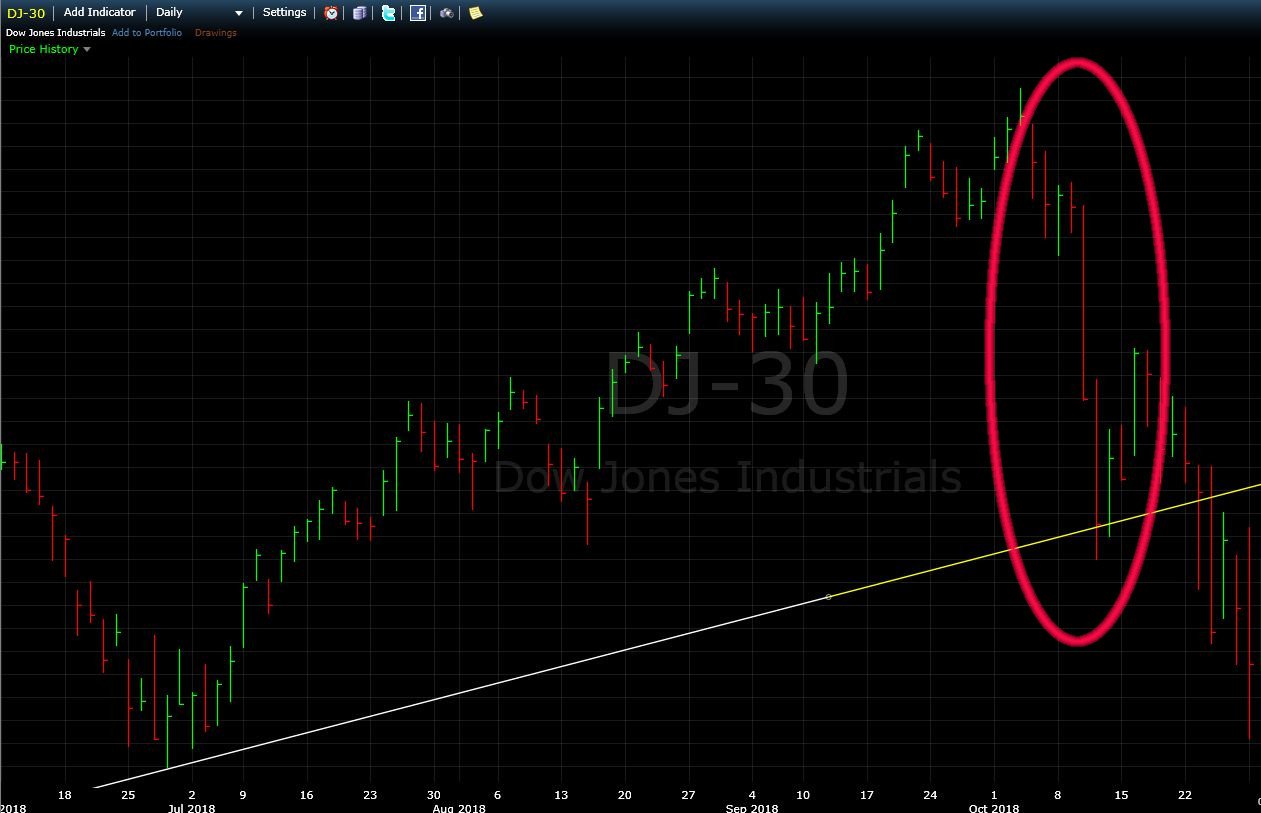 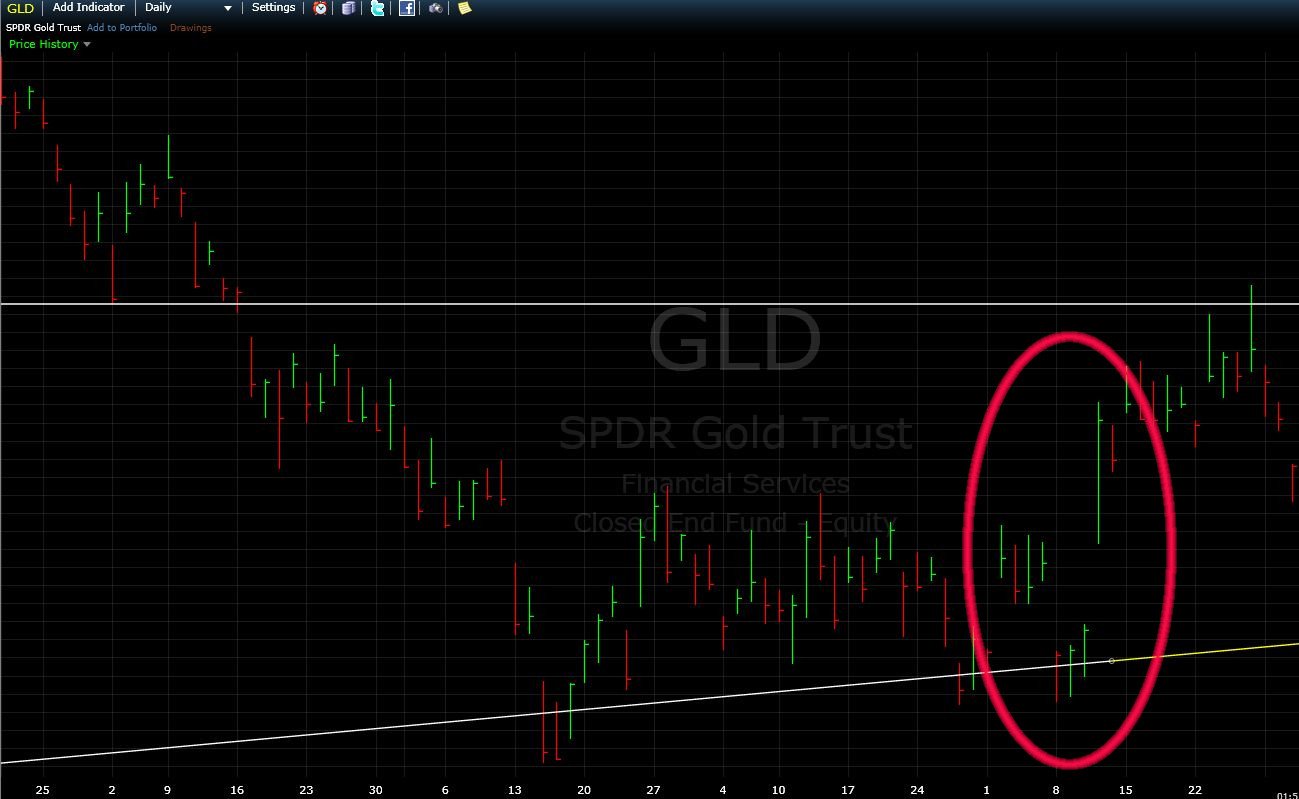 As expected, gold (shown here using GLD, a gold tracking ETF) began to pick up right after the volatility started. It takes a lot to get gold excited, but this is why I have it in my portfolio!

Something I realized many years ago is that individual speculators (you and I) have very little influence on the markets. Even if you have a few million invested, it is a small spec on a fleas back compared to the commercial funds out there which manage billions and billions. A difference which is possibly not so obvious between the big boys and us, is that when the market takes a dive, the funds can’t just pull their capital out of stocks and park it in a bank, waiting for things to settle down, as you and I can.

There are a few reasons for this;

1. Because fund managers of actively managed funds have to try to make money for their clients, even in a market downturn (even though they rarely do so).

2. Most banks, no matter how large they are, typically won’t take a few billion in a cash deposit all at once, and if they do, they may actually charge the fund interest to keep the money in the account. As opposed to you and I whom they pay to have capital in their accounts (a little bit at least).

3.The third thing of course concerns the lack of government insurance on that kind of capital when it is sat in a bank. If the bank was to go belly-up, there could be a problem. So it is better for them to own some type of asset instead of just sitting in cash in a bank. This also goes for leaving the cash sat in a brokerage account. $250k is typically all that is protected. Some of the larger brokers will park cash between insured bank accounts for you, but again, with billions, not so easy.

So, capital is moved between assets based on what these fund managers think is going to happen, or is happening at the time. Typically money will flow into government treasury bonds if they think the downturn is going to be a short-lived, or a more gentle sustained downtrend is expected. In this scenario bonds, typically medium to long term, will go up in value, and the fund managers can still derive income from them based on the bond yields, albeit not that great these days.

You can see below that TLT (long term US Treasury Bond tracking ETF) rallied when the panic started. It always seems that when a crisis hits, bonds and gold jump for the first few days as panic ensues, then they plummet for a few days along with stocks, so everything falls, then, when the big money moves, bonds and gold seem to come back for a sustained rally. Let’s watch what happens this time over the next few weeks or months if a larger pullback occurs. 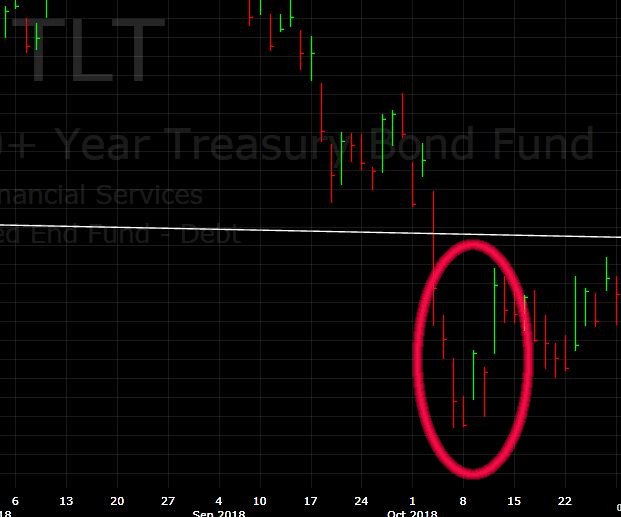 Capital will move to gold when there is a panic, and especially if there is some form of distrust in the financial strength of government. That’s and important point, historically when people lose trust in governments, gold will rally. Gold has been a store of value for ten thousand years or more, so when everything looks gloomy, people, funds, companies, banks, central banks and even governments themselves buy gold. Tons of it. Which then of course sends the price of gold shooting up.

I have no idea what the next few weeks will bring as far as the markets are concerned. All I can do is sit back and watch. Stick to my investment plan, knowing the results these assets have produced for many years in the past. There will always be pullbacks and drawdowns. It’s very important that when this happens, we don’t get scared and sell out, because as soon as we do that, we’ve taken a loss and locked it in. While we still own the assets, they can, and most of the time will, always come back.

One of the reasons I include REITs in my portfolio is because, although they are tied to the main stock market, they seem to have their own lives. Below you can see that a couple of them followed stocks for a couple of days, then turned up against the general market direction. The other totally went the opposite way. The REITs I use are volatile for sure, but they seem to help the overall portfolio. The 3% – 4% dividends don’t hurt either. 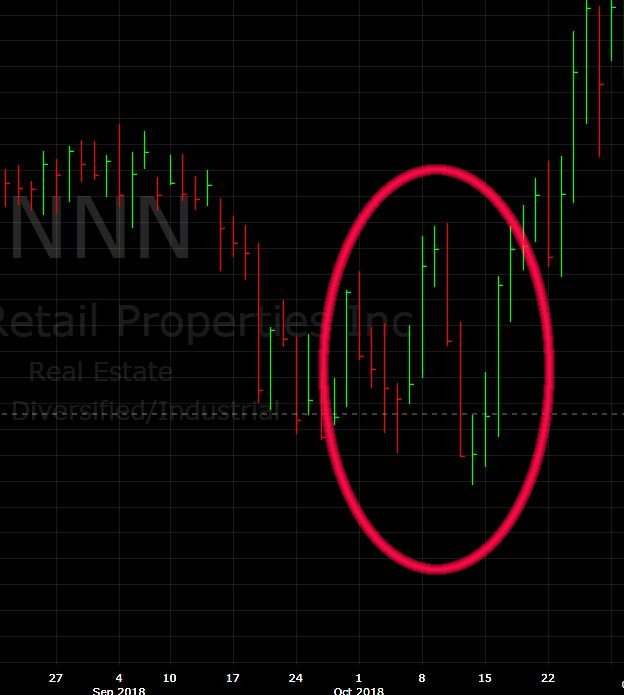 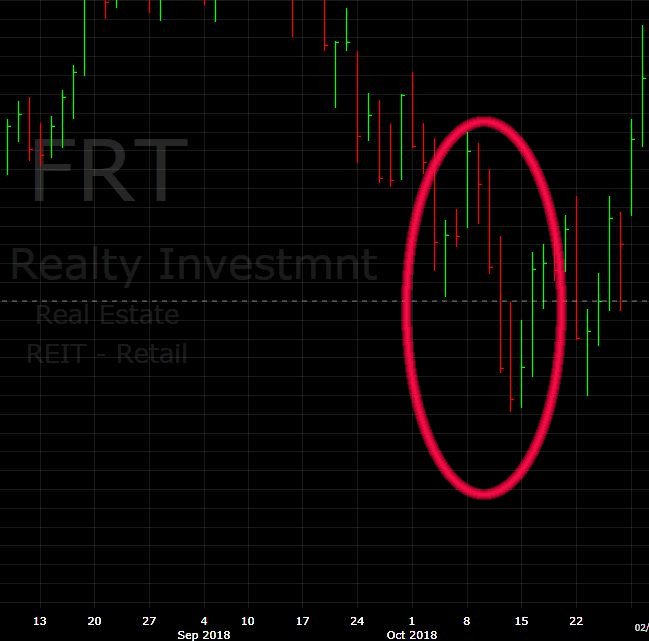 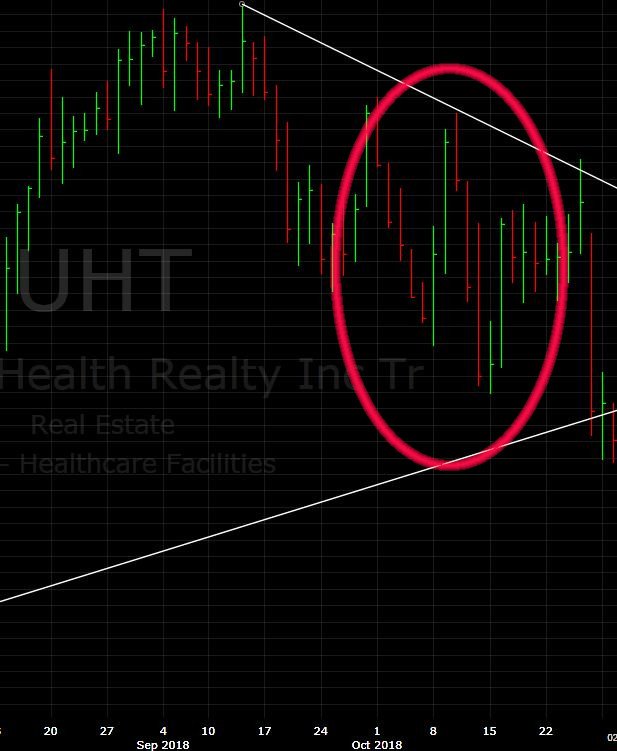 There’s not a great deal more to say about the Growth Portfolio for this month. We’re experiencing a pullback, it happens often so I’m used to it. The same assets are still part of the portfolio, and they will come back as they have always done in the past, for many, many years. We can see historically, they always do.

It should be mentioned here that it’s always prudent to keep some cash in savings and income investments, like Peer to Peer Lending, especially if you’re retired and living off your investments. In the markets, no matter what happens, you haven’t lost a penny until you have to sell an asset at a loss. If you have a good income stream, and plenty of cash to ride out a downturn in the markets, and a drawdown in your portfolio, you should never have to accept any big losses.

Hello. I’m Mark. This website was built to document my investment ideas & experiences. The good, the bad and the ugly. With full transparency I’m sharing my investment ideas, where I invest, and the actual returns (and losses) realized from various types of investments. Read More 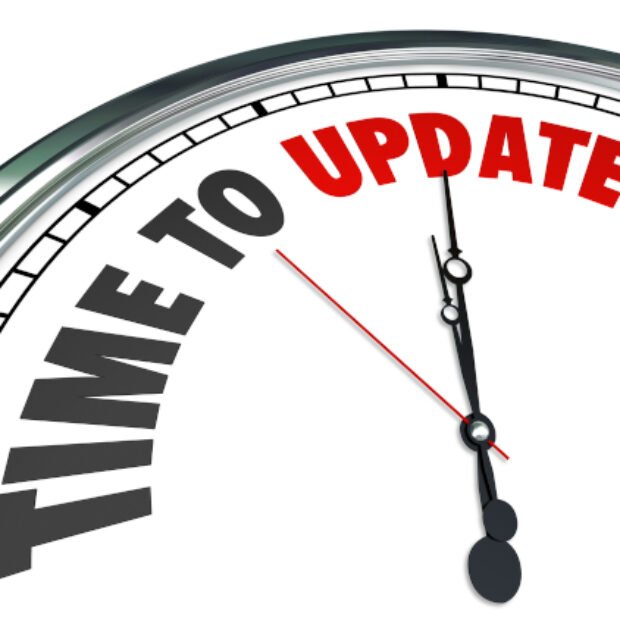 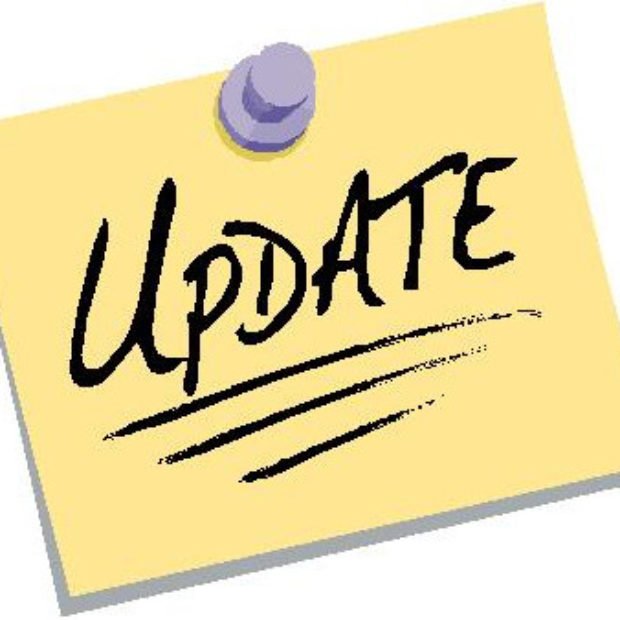 Again very little has changed in the P2P sector since the April update. I've discussed the changes and updates from individual lenders below.  At a high level, I'm still invested at about 50% of my highest number with around £110,000 in GB Pound P2P investments (from a high of... The April 2020 P2P update will be similar to the March update as not a lot has changed. Once again I've outlined my strategy with each lender in order to protect capital while still trying to make some returns. The update is a little late this month as we have a new addition to our... 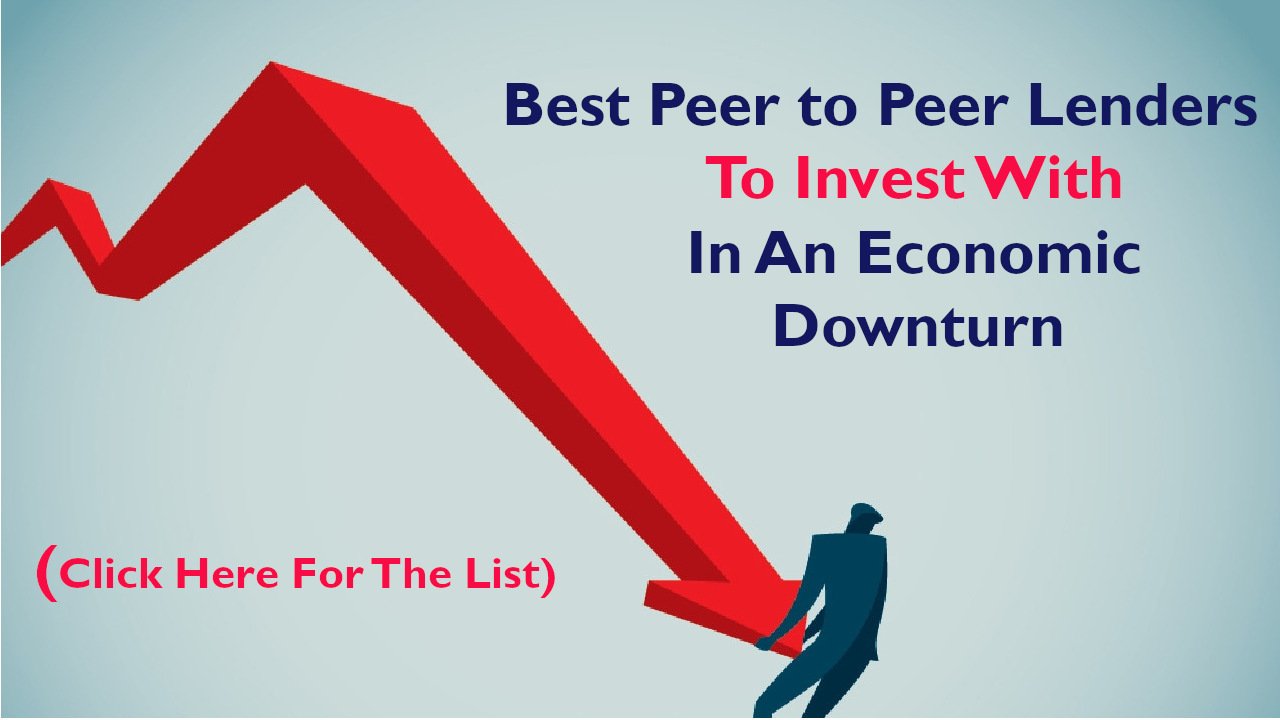